Michael Masuda, shareholder at Noland, Hamerly, Etienne & Hoss has been selected to the 2019 Northern California Super Lawyers list. No more than five percent of the lawyers in the state are selected by Super Lawyers.  Mr. Masuda has been included on the list every year since 2014. 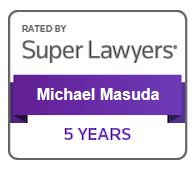 Mr. Masuda specializes in civil litigation, trial and appellate practice, arbitration and mediation and has served as a mediator in over 100 cases.  He holds the highest rating, "AV”, from Martindale-Hubbell.  Mr. Masuda has tried over 90 cases before juries and judges in both state and federal courts throughout California where he has obtained numerous million dollar plus verdicts and settlements, including a Daily Journal Top 100 Verdicts.  He was the recipient of the 2014 Lewis L. Fenton Award for Excellence for Advocacy by the Monterey County Bar Association, and in 2017, Mr. Masuda was recognized as one of the Top Attorneys in Northern California.

Super Lawyers, part of Thomson Reuters, is a rating service of outstanding lawyers from more than 70 practice areas who have attained a high degree of peer recognition and professional achievement. The annual selections are made using a patented multiphase process which results in a credible and comprehensive listing of exceptional attorneys.  The Super Lawyers lists are published nationwide in Super Lawyers magazines.